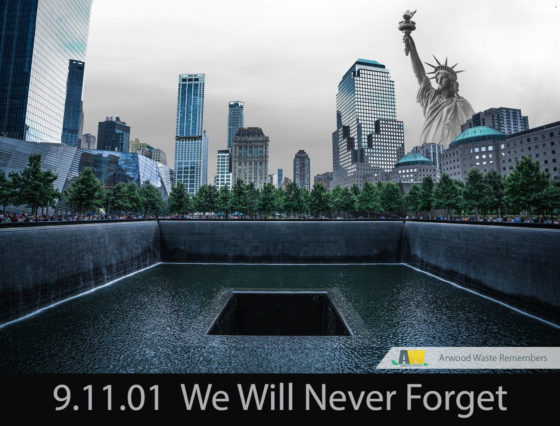 On this somber day, we remember and honor those who lost their lives on 9/11. We offer our sincerest thanks to the first responders who rushed towards ground zero in the minutes, days and weeks that followed.

At Arwood Waste, we offer prayers for comfort and peace for all those who lost loved ones as a result the attacks and for all the police, fire fighters and emergency medical personnel who risked their lives to save others.

On September 11, 2001, the world watched as 2,605 U.S. citizens and 372 non-U.S. citizens lost their lives. The final death toll included 2,606 individuals in the World Trade Centers and surrounding areas including 343 firefighters and 71 law enforcement officers, 55 military personnel in the attack on the Pentagon and 265 passengers on the four planes including 40 passengers and crew aboard United Airlines Flight 93 which crashed in a field in Shanksville, Pennsylvania. Over 90 countries lost citizens in the 9/11 attacks.

While millions tried to make sense of the shock and sorrow, we came together as a nation to mourn, remember and honor friends, neighbors and loved ones. As we grieved, unity and patriotism swept the nation. American flags flew at half-staff as millions volunteered and donated blood and congress came together to pass a victim aid measure.

As we remember on the losses of 9/11, we reflect on the words “United We Stand.” As a nation, we are strongest when we stand together in support of our neighbors.

At Arwood Waste, we encourage you to participate in Patriot Day memorials, ceremonies and volunteer activities in honor of those who were lost on 9/11. On this National Day of Service and Remembrance, consider joining a volunteer project in your community, donating blood through organizations like One Blood or Red Cross, volunteering at a National Cemetery, donating to support the 9/11 Memorial Museum or simply reaching out to support a neighbor in need.

However you remember 9/11, we hope you find solace in your family, community or religion.

“Today, we honor all who lost their lives in the heartbreaking attacks of September 11, and all who made the ultimate sacrifice for our country in the years that followed. In memory of these beautiful souls, we vow to keep moving forward.” – September 09, 2016 Presidential Proclamation

Rent a Dumpster Near You!